I, simply, will not be quiet.

I can’t afford it. I have a son. And I don’t want to afford it anymore because I think it’s killing me, literally. So this post is for you if you’re a human male because it’s ok to talk about shit. It’s ok to feel shit, it’s ok to be overwhelmed, it’s ok to not know what to do, it’s even ok to feel angry, believe it or not.

I haven’t found too many places today where being a guy is ok. And I don’t like that. And that’s new for me, the “not liking it” part. In the past I really didn’t pay attention, didn’t care to know myself, didn’t care to know about any type of struggle I might have, didn’t care to know that underneath everything I’ve been taught and everything I believe that I am a human being, made of the same stuff that women are made of. In fact I’ve been a proponent of the differences between men and women, emphasizing them over the things we have in common. I have been incorrect in this. 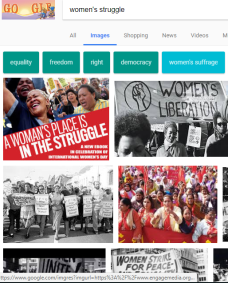 The objective, I suppose, is to discover more of my male self, my responsibility in the world as a male and to ultimately create a dialogue and action for a change in the way the male/female dynamic is playing out that reflects and supports a humanitarian solution and path. Whenever I loose my focus or feel like who am I to do something like this, I think of my son and what I want for him, and I am put right.

For a first glance at the playing field, check out the two images above.  The first is a Google Search of “Women’s Struggle”, the second is a search of “Men’s Struggle”. I guess men’s biggest struggle is tee-shirt choice. More to come…

Together, We Are Human